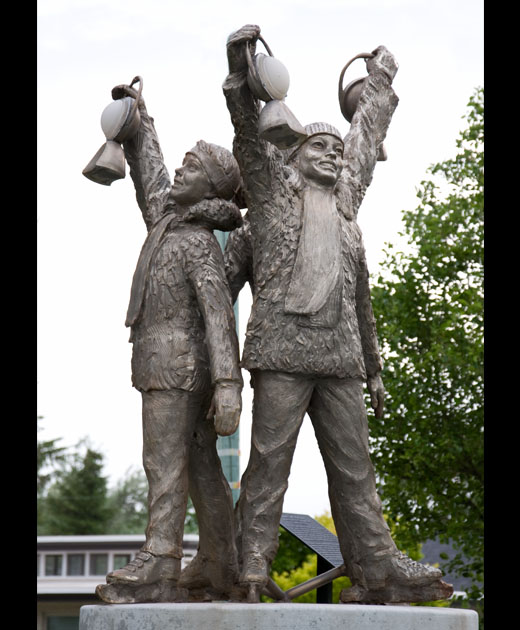 “The Children of Light was an important symbol of the Salt Lake City Olympic Games, representing the youth of the world and hope for the future. In hosting the best games ever, it was the volunteers–whether cast members in the Opening or Closing Ceremonies, or others who performed a myriad of tasks–were a key to its success. Hundreds of young people from Salt Lake and throughout Utah participated as Children of Light. This sculpture is in tribute to these cast members and all of the volunteers of the 2002 Winter Olympics and Paralympics, and a reminder to our entire city of the idealism of youth that is the best of the Olympic spirit.”

A child, holding a lantern, battled and overcame a storm—representing life’s adversities—because he found the courage to summon an inner force, the Fire Within. He shared his power with other children, who spilled into the stands [of Opening Ceremonies] with their lanterns. This Child of Light became “a little thread that went through all this tonight,” said American astronaut and former senator John Glenn, chosen as one of the eight Olympic flag bearers. “He kept coming back and that’s really what this is all about, encouraging young people to strive for excellence and do their very, very best.” The Child of Light led in the parade of athletes…

And the final chapter of the story of the Salt Lake 2002 Olympic Winter Games was concluded with the Children of Light, who had symbolically carried the fire within during the past two and a half weeks… The Child of Light passed his lantern to a child from Torino, representing the transfer of hope, peace and honor to the next host.

Main Street Art is one of the nation’s premiere sources for Fine Art Bronze. Our talented artists cover many styles and subject matter. All work is cast in small limited editions. For questions about purchasing or commissioning work please contact us.